If you enjoy the adventures of misadventure like me you will love this race! I personally loved it so much I might go so far as to say everyone should get to experience this at least once. To me it was an extreme throwback to track meets. You’re having insane amounts of fun but also stuck for what feels like forever waiting for your race. You have the anxiety of having a general idea of when to warm up but don’t know exactly when your race check in will be called (the runner before you gets there). You go through every possible phase of excited, hungry, tired, overtired, and many other emotions/states with a huge group of your friends there to support you. It’s the perfect mash of testing yourself physically and mentally while also having a freaking blast!

Normal teams are 12 man and use 2 vans each with 6 people. You are going to be “stuck” with the people in your van for the next 24 hours, but really won’t be seeing much of the other van group (only at major transitions). From what other normal teams were saying it sounded like you’d be pretty safe to not really even know the group in the other van. If you are still dedicated to getting 12 people that actually have some connection to one another (like my team was) then you are in for a treat because getting 12 people to coordinate is quite the task. My team ended up being a team of 9 due to last minute injuries. With 9 people instead of 12 we had to get creative and ended up making 3 groups of 3 which then rotated about the vans such that two teams would be in the active van, and one would be in the benched van. The teams rotated so all groups got to hangout with the others at multiple points. I really liked this setup since I then got to spend time getting to know everyone instead of just the 5 others in my one van like a normal team would. The only real issue was we all had to take on a fourth leg. (Each person only does three legs on normal teams.)

1. Don’t Be Afraid To Meet Strangers!
I was a sub for one of the injuries and my friend who was the sole link I had to everyone else was another injury who had to dropout so I didn’t actually know anyone in the end. Even without really knowing anyone on my team I had an AMAZING time. Granted they just seemed to be a very welcoming and friendly group of people overall, but that seems to be the type of people this race draws so I wouldn’t be afraid to give making new friends a shot! The community as a whole was amazing and other teams cheered on/helped each other constantly during the race.

2. Expect The Unexpected!
Now even if you do happen to have 12 reliable friends, you still have to deal with pacing and other surprises, so don’t think everything will go perfectly as planned. Unless you’ve done the race before almost all legs are going to come with some unpredictable surprises.

4. Rate The Legs Yourself!
Since our team was still shuffling things around last minute we had relied on Ragnar’s leg ratings. One of my most important tips would be not to listen to their leg ratings. I’m still not sure what formula they used for their calculations but it never seemed to match what our runners reported afterwards.

Leg 1: Hard
This leg was one of the most extreme examples of what we thought of as a terrible rating. It was only listed as “Hard” when “Very Hard” was the highest difficulty. THIS LEG WAS LITERALLY STRAIGHT UP AND DOWN A SKI MOUNTAIN. It was only a mile, but the incline was so steep not a single runner could run it. It had to be walked. As we were waiting for our team’s runner to complete it one of the other runners who already did stumbled over to us quite literally foaming at the mouth and in complete delirium of having just run it mumbled (almost to himself sounding like he was traumatized), “You can’t run up the mountain! You just can’t!”. It was like a scene out of a pirate movie where the crazy guy is warning you of the treasure’s curse. Not only did it sound insanely awful to get up, but then you have to run back down this insanely steep mountain trying not to destroy your knees. I honestly think the leg sounds silly to be in a running race since you can’t physically run it and that it clearly sounded like the absolute hardest leg of the race.

Leg 7: Hard
My first leg! Not only was it the first leg so I was fresh, but it was also pretty much down hill. It was absolutely my easiest leg, but for some reason was rated as “Hard”.

Leg 34: Easy
It was a shorter leg, but much hillier than my first AND it was my 4th. Although it would normally only be someone’s 3rd leg it still was much harder after multiple other runs and so many hours having passed from the race’s start.

Those were just some examples of the difficulty rating not aligning with how it felt and my thought process as to how to rate legs.

My recommendation for making your own ratings:

a. Thinking about elevation!! I’m not sure if it was just because it was a New Hampshire Ragnar or what but even the flatter legs were decently hilly.

b. Think about how much you’ve done before this leg.

4. Have A Game Plan For Night Runs!
I run at night a decent amount so I thought nothing of it when I found out I had a 6.5 mile leg around midnight. A few other teammates had said they didn’t love their night leg but I had mostly attributed that to them having never run at night. I started off really confident but almost immediately decided SHIT WAS WAY TOO SPOOKY. After passing 2 runners and some awesome locals throwing a party to cheer on runners at the very beginning there was NO ONE. No runners, no vans, no houses, no lights. It was literally only me and my headlamp on the middle of a forest. To make things even spookier it was crazy foggy so I was only able to see about 3 feet in front of me. (Another runner on my team said he actually ran out into an intersection and only saw he was there once he got to the center.) After seeing no signs of this being part of a race course for multiple miles I became pretty convinced I had missed a turn sign in the fog. I messaged my team to possibly leap frog me but they were distracted with trying to get to the transition safely themselves and didn’t see until later. Eventually the route met a town and I felt much better for the end. I would recommend planning to leap frog, buddy up, or keep tabs on night runners.

5. Check Up On Your Runner!
The course was very well marked for a 200 mile race through roads that couldn’t be blocked off, but there were still a few points where people got lost. I had to shout at a runner during one of my legs to take a turn, we had to drive after another team’s runner to redirect him, and our own runner ran some extra due to a wrong turn. You aren’t allowed to follow your runner too closely due to the roads being open still, but check up on them when you can! Also to cheer them and others on!!

6. Bring cash!
Many of the transitions have lots of delicious food/snacks made by volunteers and while it’s mostly free, they take donations. I was pleasantly surprised they even took care of the Celiacs and multiple stops had specialized, homemade gluten free foods (like cookies and soup)! The volunteers are also some of the nicest people you will ever meet so you’ll definitely want to donate!

7. Bring lots of water!
Reach the Beach tries to be Eco friendly and not use cups so bringing your own water is your best bet.

8. Be there for your runner!
It is the most heartbreaking thing to see a runner coming in, giving it all they’ve got, only too have their next teammate not be there.

9. Snap bracelet are hard!
Most of the hand offs where people tried to actually snap the bracelet on the next runner failed. It’s not a super big deal until you start getting to the end and are too tired/delirious to find/bend over and pick up the runaway snap bracelet.

10. Get ready for the finish!
You are supposed to join your last runner in the shoot. While we didn’t have the normal van situation/schedule so we probably cut down on time even further, it still seems like a challenge to get your whole team to the finish before the runner gets there. The last leg of Reach the Beach was only 4 miles and the railed off part of the shoot was decently long so we didn’t get into it in time and just ran alongside it. 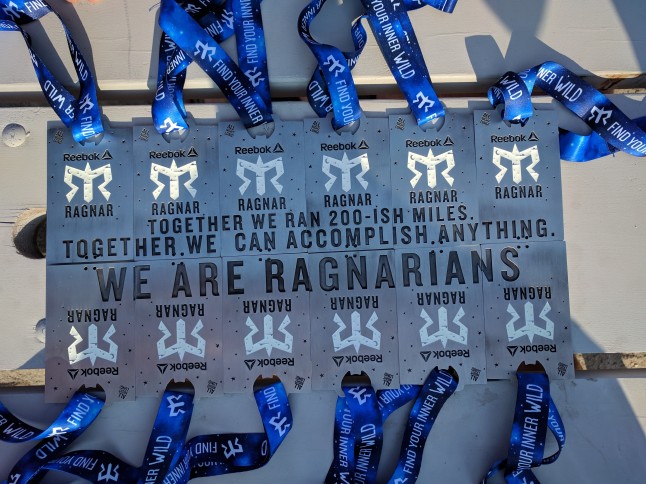 Ragnar was an insanely amazing time and I actually am hoping to run it again with the same group! I hope these tidbits will help you with your Ragnar or make you want to run one if you somehow didn’t already!

One thought on “Ragnar Reach the Beach Tips”

5/29 Life on the edge 🏔️
Kels looking like an REI model while I roll around on the ground 😂😂😂
Feeling like a disney princess bc we finally found some damn summit birds to feed! 😂👸🤬
Found out Tecumseh is HIGHLY underrated 💙🏔️
The goodest of times 💙
Loving every minute of it