Last weekend’s Spartan sprint didn’t go at all as planned. I have done another obstacle course race multiple years before and thought I knew about what to expect, but I was extremely wrong. Since Spartans seem to be THE obstacle race, I assumed it would be bigger, but also more organized than the previous one I had done. So when they said to arrive 2 hours before your start time in the pre-race email I figured that had to be an exaggeration.. It honestly wasn’t. The “parking lot” was your standard huge open field converted into parking for the day. We sat in line (that got converted into two lines and then merged back into one for seemingly absolutely no reason) for over 20 minutes, then had to walk a quarter mile to the shuttle stop to wait in another disorganized line. The shuttle ride was also about 15 minutes and dropped you off at the entrance to the campground which was about a mile away from the start line. Since I had assumed we’d be good with a 45 minute buffer we ended up on a time crunch and running as much as we could so we had a nice warm up I guess 😅 Luckily, registration check in and bag check were quick so we were fine once we moved to the next 15 minute start slot.

When I read 3+ miles I automatically assumed a 5k (with the plus just to account for obstacles) since that seems to be the universal “fun run” distance. I didn’t seem to be completely in the wrong though since as we jogged to the start, the starting line hype guy announced, “You know how you thought this was a 5k? Well it’s actually 5 miles!!” My non-runner boyfriend and I looked at each other slightly alarmed for him, but both thought while it would definitely be a challenge, the obstacles would break it up enough to make it doable.

The race began and we were immediately thrown into an EXTREMELY technical, single track trail. Far more technical than any trail I’ve ever seen in the area. It was super pretty and CRAZY fun.. for someone who enjoys challenging trails. The “path” was pretty much entirely rocks, roots, puddles, and mud. Sometimes there wasn’t even a clear path and sometimes the mud was so deep and thick it threatened to suck your shoes off. We ran though multiple streams and even through/in what I think was a small river at one point.

I originally assumed the path would open up and get easier once we got to the obstacles, but all the running portions were this crazy trail, with field openings just big enough to house each obstacle.

Rope Climb – I was able to do it AND it was easy!!! I was bummed they didn’t have a photographer there ☹️ but also get that’s probably not the most flattering angle for a photo 😆

Bucket Carry – Trudging along in super murky, ankle deep water and taking my next step into an unseen hole deeper than my leg.. only slightly terrifying. But I made it the whole way without stopping or putting the bucket down!

Sandbag Lift – I jumped up and held on to the rope hoping my weight would bring the bag down.. it didn’t. I had to lay down on the ground and prop my leg against the fence for even more force in order to make the bag budge.

It wasn’t a bad time for me until it started raining at the end of the first hour. It was a cooler day to begin with and the rain drenched you and chilled you to the bone. I was having a hard time moving my hands and shivering so badly that I wasn’t really able to give it my best for some obstacles. It also made most of the medal, hanging type obstacles so slippery they were near impossible. (I don’t think I saw a single person complete just the plain rings. Even the most jacked guys were doing burpees there.) Toward the end I was so cold that burpees were no longer a punishment and I was happily doing them for warmth.

By the time we saw the finish and the fire jump I think we were both pretty much at our limit. I honestly might have teared up a bit 😂

The worst thing was realizing we had a mile walk back to the shuttle stop in the rain while freezing with my boyfriend now only able to move at hobbling pace. Plus the walk from the shuttle drop off to car.

Looking back it was fun (I’m not sure if I would have told you that at the time lol) but the rain made it not only way more brutal, but also kind of ruined some of the bigger obstacles I was looking forward to. I’m glad we did it and this definitely made me want to do more Spartans to attempt to complete more obstacles and distances, but I think I’d pass on another rainy one.

I had signed up for this race awhile back at the same time as Newport as part of my get-well-soon present. While Newport just wasn’t my day, I tried to get a little training in this time in hopes it would help and picked up a “How to Train for a Marathon in a Month” training schedule I found online. It definitely struck me as kind of an odd schedule (with a lot of 2 milers), but what do I know about actual training plans, so I went with it as much as my life allowed (my Master’s project needed work again so that’s where the 26, 27, 30, and 1st went). 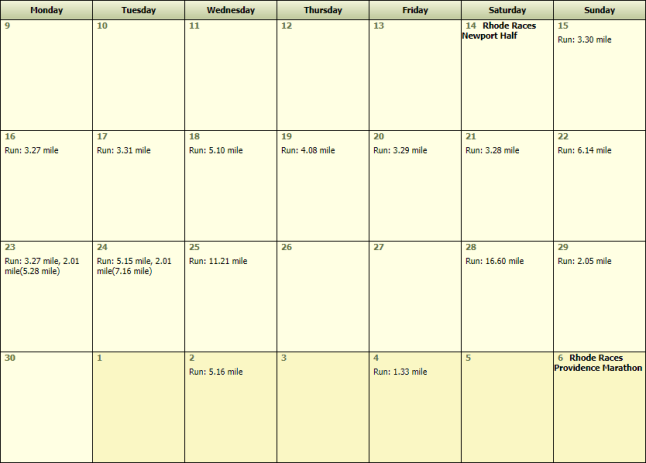 I switched most of the two’s to three’s

I felt a bit better after managing 11 miles at 8:27 pace in crazy wind and rain. And then I felt a bit worse after being able to complete 16 miles at 8:35 but feeling pretty darn crappy towards the end. I tried to focus on the fact I made it 16 miles on the first hot day (REALLY HOT, I got burnt pretty bad) of the year when I prefer running in the cold.

The morning of the marathon I woke up with my stomach feeling awful, but I recognized it as nerves and my boyfriend reminded me I had already completed a marathon through the freaking desert. Also while stretching before the race Marathon Panda Maurice found me! It was awesome to actually meet him in person and his super positive vibes definitely helped to calm my nerves further. By the time I was lining up I was back to feeling pretty good.

The gun went off and I started trying to keep with the 4 hour pacer, but they seemed to be going significantly slower than pace. Looking at Garmin connect now though I was faster even in the first mile so I’m not sure if something was up with my Garmin at the time or I was just completely impatient and ditched way too early 😅 Also looking back the start of the course was far more hilly than later so they may have been going for even effort. I probably should have known the pacers knew what they were doing and just stayed with them, but I was also feeling really good so I went with it. Miles 1-20 FLEW by. I found a few new and old friends to talk to at different points, zoomed (or felt like I was 😂) up hills, and cruised along the long, flat wooded back roads and bike path.

I was trying to make sure I at least took a few sips of water at every water stop and after the half started eating a Honey Stinger chew every 2ish miles. Even so started feeling kind of off during mile 21. I slowed down in hopes that slower might ease my nausea, but it was only getting worse. By mile 22 I felt like I was dying of thirst (on top of the nausea) even though I had been drinking a decent amount and it seemed like the next water stop would never come. My mantra became, “Just get to the next water stop”. I thought maybe I could manage that, until I hit a short but rather steep hill. As soon as I started up the incline, the slightly hunched position it put me in pushed my stomach over the edge. I had to stop and step off the side in an attempt to be sick but I had nothing in me to get out. After battling back the nausea the last few miles, coming to a complete stop seemed to open the flood gates and I was hit with all the awful feeling at once. Every time I took a step I had to dry heave. I don’t remember actually moving but I definitely managed to make it a bit further in this state because the hill wasn’t where I ultimately stopped, but it was awful and I knew there was no way I was making it 3 more miles like this. Tons of runners saw me and offered me things to help. The cop stationed at the turn I stopped at was amazed at how many people stopped mid marathon to try and help me. (Love my running community!!) I ended up accepting some of a kind strangers water, with I think Nuun, but it seemed to be too late for anything to help. After 20 minutes of being unable to move without being sick I took the cop up on his offer to have someone come get me. Little did I know he meant an ambulance.. (In my out-of-it state I totally had thought he meant another cop to just bring me back to the finish.) so I accidentally got carted off the course in an ambulance 😂

Overall it was a really fun day and I’m really happy my legs (and everything else besides my stomach) felt great and definitely could have made it the full marathon! After talking to some friends, I think it may have been a salt issue and I’m mildly kicking myself for not taking a salt tablet someone offered to me. Now just to get in more long training runs to test some more hydration and nutrition before my next attempt!

Cheesin it hardcore because I LOVE RUNNING!!!