I’ve had a Spartan trifecta on my goals list for awhile now, but had thought of it as more of a far off/B goal, until one of my old college roommates invited me to join a sprint back in May. Even just the sprint was WAY tougher than I expected and it immediately moved a trifecta up on my goal list. Lucky for me, one other friend from the sprint group was also struck with the need to complete a trifecta so we began plotting.

While I do really believe you get your money’s worth from a Spartan race, they are still rather expensive, so when my friend suggested volunteering in order to wave the ENTIRE race cost I wasn’t about to say no. Also it’s not often I have a chance to give back to a race by volunteering while still being able to run it. She actually ended up volunteering for two different “jobs” on two different days to get two free race entries from the single race! I opted to just volunteer on race day since it was a bit of a drive and I didn’t want to make it twice. Her first job was course building (not on race day), which she said was very fun and didn’t require as much prior building knowledge as their instructions might lead you to believe. (They literally ask you to bring your own hardhat if you own one 😂)

We arrived at the race venue bright and early Saturday and were checked in quickly. We were given the choice of a short or long sleeve technical tee (I honestly want to volunteer again just for the shirt!) and told to grab what we wanted from a selection of snacks and water. We were separated into groups by our jobs: my friend had signed up for the festival and I for the course. I later found out she had been delegated a job at the merchandise tent (unsure the other possible festival jobs) and course jobs seemed to consist of water stations and obstacles. My group’s boss gave us a choice of which obstacle/water station we wanted (within his section of the course) and I wanted an obstacle (but one that most people can’t mess up or get too hurt on) so I chose the A-Frame. This also put me within viewing distance of the rope climb, which is a favorite of mine, but too much responsibility with a way higher chance of people falling. 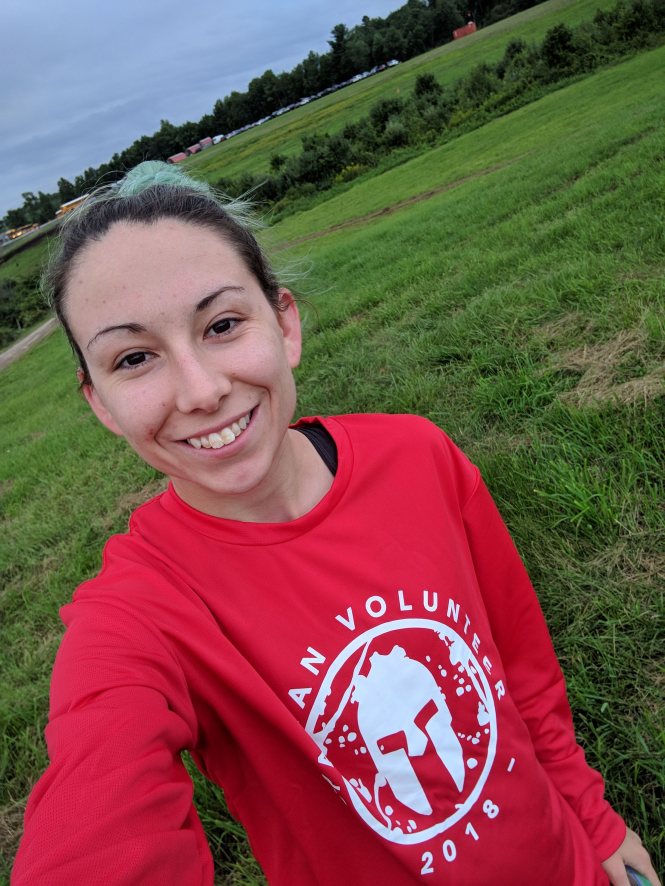 Do it for the shirt!!

I was given a walkie-talkie, a rundown of the basics, and a laminated printout of them as well. I was asked to call out when the first, second, and third male and female elites made it to my obstacle and after that my job was essentially just to cheer people on, call in any medical issues, and direct people off the course in the case of inclement weather. I didn’t have to do anything besides cheer 🙌 and gained a partner part way through the day so I got to chat and learn a bunch more about Spartan stuff!

[Just a note for others thinking of volunteering and not a complaint at all: They didn’t give us a full out lunch, but as many of the snacks as you wanted. You also were allowed to bring your bag with you so you could just bring your own lunch if snacks aren’t enough.]

One o’clock rolled around soon enough and we went back to registration to sign out of work and get our race packets since we opted to race the same day as volunteering. (You can race same day or save your free race for another time.) The rain had mostly held off all day.. right up until we were getting ready to run 😭 It wasn’t cold like last time though so even with on and off showers throughout it was fine.

The first mile was almost completely running (with only like the last 25 meters being the vertical cargo) through insanely deep, shoe-sucking mud in a corn field. At certain points people were going through the corn a bit because of how hard it was to get your foot back out of the ground along the beaten path. I think I jogged that whole bit thinking the running could only get better, but it sure proved me wrong. I pride myself in being a runner and always trying to run the running part of races, but there really wasn’t a whole lot of this course that you actually could run with the insane mud. There were some technical trails again, but even in those it was mostly just ankle deep mud, just now in the woods instead of in corn fields. It was still very fun, just VERY hard.

For me the first 4-5ish miles were mostly hard just because the mud made running impossible. The obstacles during that part felt really easy. Lots of different walls, which I finally figured out a technique that worked for me to be able to scale all of them without help!!! INCLUDING the inverted! Of course no pictures were taken during that part of the race 😆 I was feeling really good, I think partially due to the adrenaline of completing obstacles then helping me through the next.

There was a definite lull after that for me. Some basic obstacles, like trenches, crawling under the barbed wire, dunk wall. Also there were a few move-heavy-object type obstacles during that portion, which I don’t really like so they added to the lull. 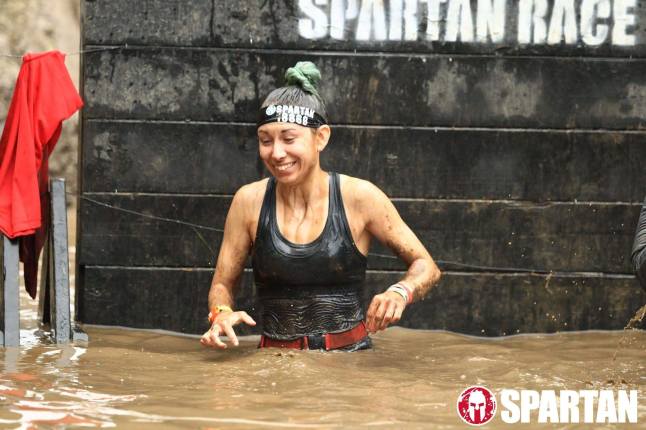 Then the real race began.. Between mile 6 & 7 was where they put all the toughest, most technical obstacles. The twister, bucket carry, multi-rig, Olympus, monkey bars, javelin, Hercules hoist. It was honestly just insane. I hadn’t done a single burpee up until this point and suddenly I became the burpee master. I had heard (while volunteering) about people dropping out suddenly at the bucket carry and was confused, but when I got there myself I completely understood. Last time I was able to carry my bucket without putting it down once. This time I “put” (more like dropped) the bucket down about every 10 feet. It was horrible. 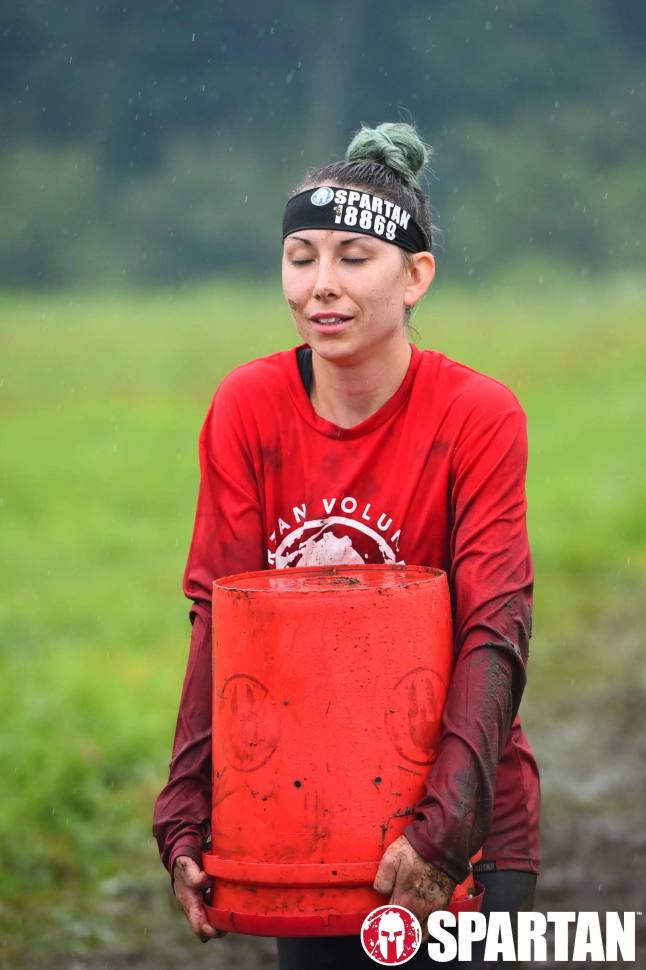 Excuse me while I sob into my bucket

It also began to really rain at this point, which was a bummer since it was where all the obstacles I had wanted to try dry for better grip were (twister, multi-rig, olympus, monkey bars). In the end I was able to do all of those obstacles (minus the monkey bars I opted out of) at least half way!!

Wasn’t even going to try this.. then suddenly I was just doing it

It was a REALLY tough race. Just when I though the sprint was the hardest thing I have done, this one might have topped it in its own horribly, awesome ways. The second half I kept thinking I had given my all and then the next obstacle came up and I mustered a little more from who knows where. It also felt AMAZING to see that amount of progress. Going from needing some help on some walls to instructing others in how to get over them, and being unable to do any of those last hard obstacles to being able to complete at least half way on all of them.

I always find it crazy to look back on races, when you KNOW in the moment you thought about quitting and NEVER racing again multiple times, but soon as you’re done you’re thinking about signing up for your next one. Now I CANNOT WAIT for the Beast at Killington and all the new challenges it will bring to test me even further.

Have you ever volunteered at a Spartan or another race?
What’s the hardest race you’ve ever run? Would you run it again?
What’s your proudest progress moment?

A few weeks late but I got some more IRL friends now 😊
5/29 Life on the edge 🏔️
Kels looking like an REI model while I roll around on the ground 😂😂😂
Feeling like a disney princess bc we finally found some damn summit birds to feed! 😂👸🤬
Found out Tecumseh is HIGHLY underrated 💙🏔️
The goodest of times 💙