I finally participated in my first trail Ragnar and oh my gosh was it fun!! I still think both types are unique experiences and fun in their own chaotic ways so you should at least try both, but the trail Ragnars are just so much more chill.. Also TRAILS 😍

So just like most of our road Ragnars (because my team is awesome) we started out the night before camping! Mild disappointment at the fact that the sites were provided by Ragnar and therefore we had to listen to their rules of no fires, but I GUESS it was safer that a bunch of sleep deprived crazies didn’t have fire 🙄😂 I got there really late that Thursday night and went to sleep almost immediately.. after scarfing down some food since Captain Dad said I should eat something. That’s one of the best things about the trail version, you can bring a camping grill and tons of food and snacks since you don’t have to shove it all into a car. I ate like a freaking queen that weekend! You can definitely stop and get food during the road ones (when you have time), but I prefer eating foods I’m used to whenever I want. They also had food trucks at certain times!

Race morning we woke up way earlier than our start time, watched the safety video (it’s a different one for trails!), and picked up our Salomons! The trail Ragnar are sponsored by Salomon and you can rent a pair of their shoes to test! The area was still really wet from the recent rain and I only had one pair of trail sneakers so I decided to give them a try and have to wear wet shoes at least one less time. I would highly recommend renting some! It’s free and they just take your license until you give them back.

I ended up taking the spot of 8th and final runner so I had A TON of time to kill. We hung out, ate, and overall just kinda camped. It was really fun not being split up or having to worry about driving. They also have “the village” which hosts tons of contests and activities! At night they have movies, fire, and smores. One of our teammates won the scavenger hunt and got a free pair of Salomons! And at one point I ended up in an inflatable ball race! 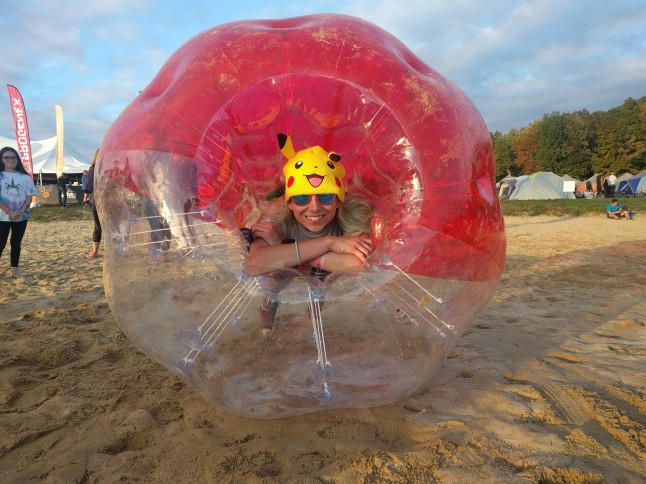 We also won greenest campsite and got 50% off our next Ragnar registration!

Now back to the race.. It’s kind of weird how the bracelets and bibs are the opposite of the road relays. You have one bib per team that gets handed off at the transition, but you don’t hand off the snap bracelet since you get your own for each lap that is the color of your loop. You may think it seems silly but by Saturday you’ll be glad you have a bracelet to remind you exactly what you’re doing 🤪 The transition also has a screen that will display your team name when your runner only has 0.25 left so that’s really neat!

As last runner I had yellow, green, red for loop order, (green being the shortest and red the longest). I would be running yellow and green in the dark, but that also meant I got to run the longest in the daylight, which was what I wanted. You don’t need vests for the trail ones so I got ready to run with just my headlamp. Make sure you know how to use your headlamp and that it’s set properly! I had mine set to red light while in camp and didn’t know how to get it to white so I ended up swapping with a teammate AS I was running to enter the trails. I’m so glad she was there because there’s no way you could navigate out there without light. It was hard enough with light! The trails were very technical at points and at others they were really muddy. The yellow trail was labeled super well though so other than being worried about falling it was really chill running through the woods at night. I really enjoyed it!

I actually enjoyed it so much that when a teammate didn’t think she could do her yellow loop I took it. My second yellow loop was also at night and super nice! The only issue was I felt like I twisted my ankle a bit.

What? Ghastly is evolving!

After another long wait I had my green loop. The green loop had a lot of road to start (like I think it was the entire first mile) and I don’t know if it was that combined with twisting my ankle or just my knee being bad to begin with but it started KILLING me. I did a decent amount of speed walking because running motion hurt too much. I’m not sure if they didn’t put out as many signs on the green loop or I was just moving so much slower but I kept thinking I had missed turns. The combo of road, pain, and worry made me HATE the green loop. I would have absolutely swapped it for another yellow. Once I finished it I tried my best to fill my next wait with stretches in hopes of not being in pain for my final loop. 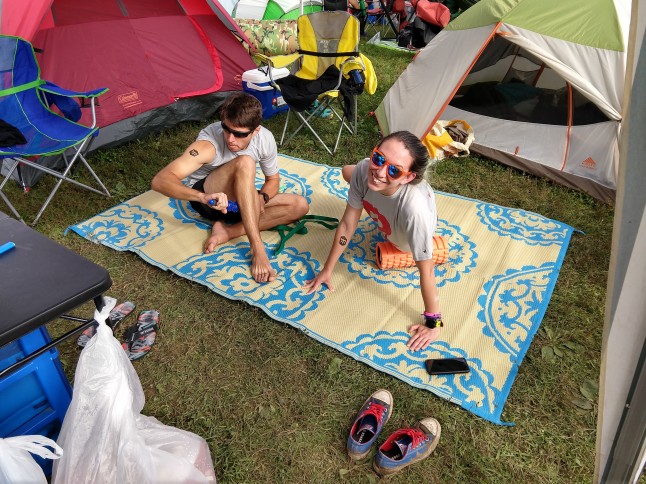 Red loop rolled around in the morning and I got ready to end the race! My knee felt decent but in the end it went pretty quickly downhill. It hurt so I wasn’t picking my feet up enough causing me to keep tripping and making it hurt more. It was a pretty awful cycle. But at least it was through the woods during the day so I could see all the prettiness! I felt bad I must have slowed my team down insane amounts, but I tried my best to speedwalk, hop/skip, and jog to the finish! 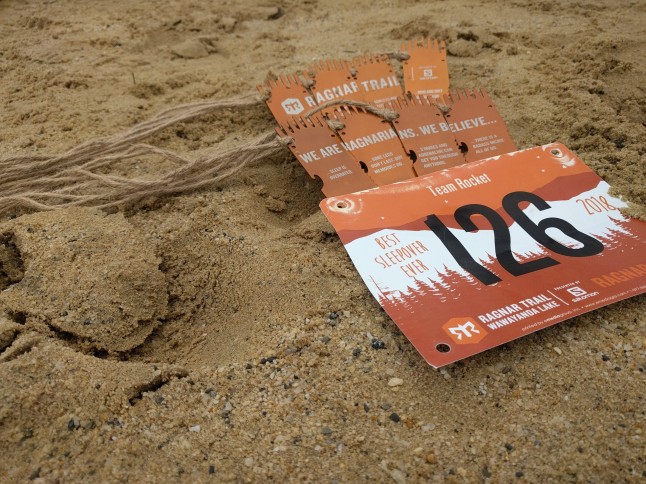