I have now run the Hangover Classic for two years and had two extremely fun, but insanely different experiences.. so different it was honestly hard to believe it was the same race!

It was so cold that most of the polar plunges in my area got cancelled due to safety and I needed a new New Year’s tradition. I stumbled upon the Hangover Classic, a 5 miler in the local waterside park, and figured I’d give it a try.. maybe host my own polar plunge in the park’s water if it wasn’t enough of a challenge 😜 My friend and I arrived at the race that morning to realize it would DEFINITELY be enough of a challenge. It was -6°F and I had literally every layer of Winter running gear I owned on and could still feel the cold. The short walk from the car to the start line had us rethinking our life choices. During the race, the course was an icy, snowy, windy battleground and my butt went numb even though I was wearing the tights I’ve always worn for Winter activities without issue. It was AMAZING the after race venue had a fireplace and I feel like I sat in front of it for an hour trying to get warm again.

This year couldn’t have been much different from last. I woke up and had to check the weather app twice and then go outside to check for myself before I was convinced I could leave the house prepared to race in just shorts and a singlet. The walk from my car to the start line was so pleasant I stopped to take pictures! There were also a noticeable amount more people this year, not just a few other crazies who also didn’t fully think things through like last year. I picked up my bib and shirt and headed to the start line to stretch. I was missing my friend  this year so I decided to give my Aftershokz a try and listen to the Training for Ultra podcast during the race. It was really nice! Between the beautiful waterside views, my podcast, and the lack of wind (it felt like literally none compared to last year), the race FLEW by. I wasn’t trying to PR or anything, just wanted to run with other people, so I was really happy with my 8:02 average pace. That was a lot faster than I had been running in training on the treadmill lately. I also checked results to find I got 3rd in AG so that was neat. One year soon (maybe next!) I’ll have to actually train for this race because I love the local beer can trophies they make each year!

Overall I really like that it’s a 5 miler instead of the usual 5k. I love Colt State Park and even though it’s always on the windier side because it’s on the water, it more than makes up for it in views and flatness! If you’re in Rhode Island for the 1st I would definitely think about giving this race a go because it’s an awesome time no matter the weather! 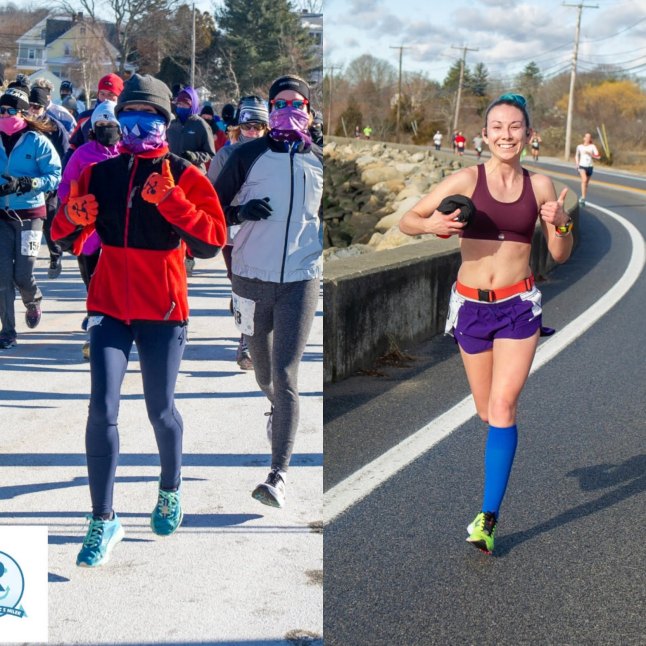 One more comparison shot because it was so crazy! 👍👍