Since I think I have most of my races selected for most of the year at this point, I figured I should go over my master racing plan!

That may seem like a lot of races, but that’s how I like my schedule. Plus most of them are just going to be for fun anyway. One of my 2019 goals I forgot to mention on my goals post was to run a race every month, so some are also to help accomplish that as well as be fun!

Most of the Vacation Races series is on my bucketlist so when the Rhode Runners crew said they were doing Antelope Canyon this year I wasn’t going to pass that up! I also have two other racecations, Rugged Maniac Phoenix and the Illinois Marathon this year!

The New Bedford Half, Horseneck Half, and Blue Hills are all local races I’ve been meaning to do for awhile now and decided to finally get around to running! As of right now the plan is to run them for fun. The Rhode Races Newport Half is also local, but I have run that one multiple times before and just can’t get enough.

Next up are my marathons: Illinois, Vermont City, and Narragansett!! I am EXTREMELY excited for them! I have now tried to run a few marathons while being completely under prepared and hadn’t had them turn out well. I’m partially SUPER nervous (what if the marathon distance is my kryptonite?!) but also realistically know I can totally do this! I’m really happy having two planned earlier and then a third way later in the year. Right now I plan to run Illinois really conservatively, just to boost my confidence and prove to myself I can do it. Also my current PR is “dying in the desert” slow so even a very conservative marathon should give me a nice PR! With the newfound confidence I will hopefully have gained, I would then like to see how I am feeling for Vermont City. My current training plan is set for Vermont, but I would like to PR (again a slow PR that shouldn’t be hard to beat) and hopefully slightly crush (that’s the hard part) the North Face 50k, which isn’t all that long after Vermont. I’m good with going by feel as the races get closer and I have Narragansett (a nice familiar course for at least the first half) as a backup if I feel like I could have given more in Vermont.

I REALLY liked having some fitness other than just running ability last year so I signed up for three ORC races this year: the Spartan Sprint Boston, the Tough Mudder, and the Savage Race. I LOVED the Sprint course last year so I definitely wanted to run that one again! Also last year when I did the Tough Mudder with my college roomies we only did the half (5 mile) and we wanted to/are going to do the full (10 mile) this year so that’s cool! For the Savage Race my friend and I are actually signed up for a competitive wave so I’m pumped to hopefully be able to run the runnable sections!

Now for the REALLY juicy stuff! I signed up for the 24 hour section of the Anchor Down Ultra. Yes, I have only run one ultra so far (Silver Falls 50k) and yes it didn’t go so well.. BUT I don’t care! Not to make excuses, but my knee was bad at the time and I had barely any training and I KNOW that with some solid training I can at least push myself to accomplish something! Will I make it 24 whole hours? Not sure. Will I make it 100 miles in that time and get a SWEET ass belt buckle? Who knows! BUT I’m sure as hell not going to sign up for a lesser section (12 or 6 hr) that would limit what might be possible! It is a nice flat, easy, million loop course though a local park so it’s also not like failure leaves me dying out in the desert somewhere (yea I learned my lesson about desert running!) either. So the current plan is to dream big and train like it’s going to happen!

My final current race plan for 2019 is the Rhode Races Jamestown Half. I ran this race originally as part of the Rhode Master’s Series. It is a pretty small race on what I felt was a really fast course to me. I think as long as I have all my planned miles logged from all my earlier races (and add in some speed work) I will have a really good base to possibly run a PR here. Also with a small field it would be really cool to place well! (For reference, I placed 14th overall that year without a great time or really training much for it.)

How many races do you plan a year?
What are your big race goals this year?
Have you ever just gone for it? How’d it turn out?!

Disclaimer: I received free entry to the Vermont City Marathon as part of being a BibRave Pro. Learn more about becoming a BibRave Pro (ambassador), and check out BibRave.com to review, find, and write race reviews!

I’m very excited to say I am going to be running the Vermont City Marathon May 26, 2019!! After running the Covered Bridges Half I fell in love with Vermont and was lucky enough to get to run two more races on Mount Killington in Vermont more recently this year. The Vermont City Marathon is much more North West than the other races I’ve done there though so I’m excited to see what this new region holds! From photos it looks like a diverse course of wooded roads, bridges (love me some bridges!), water front, and city/town with pretty brick architecture. 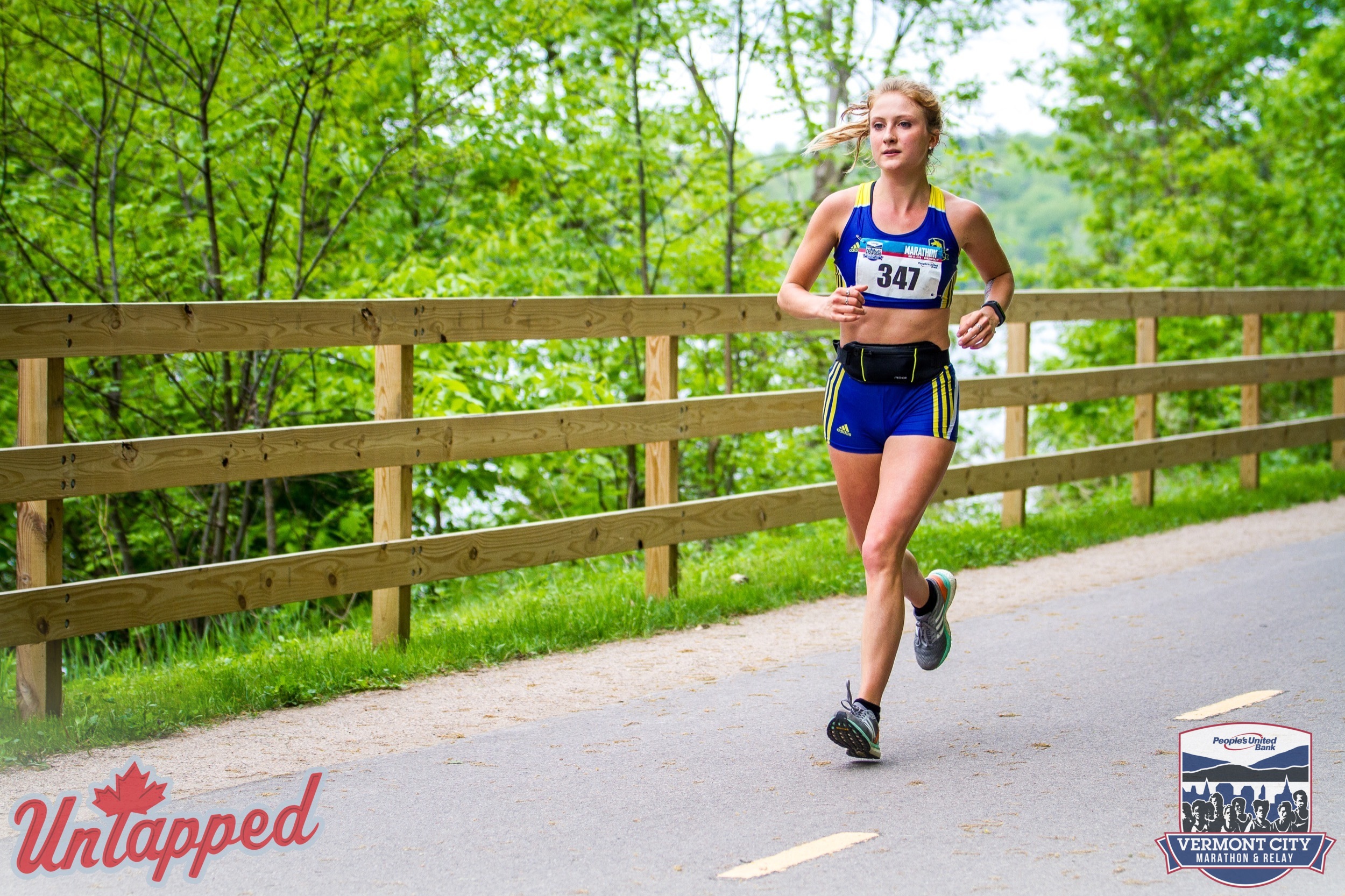 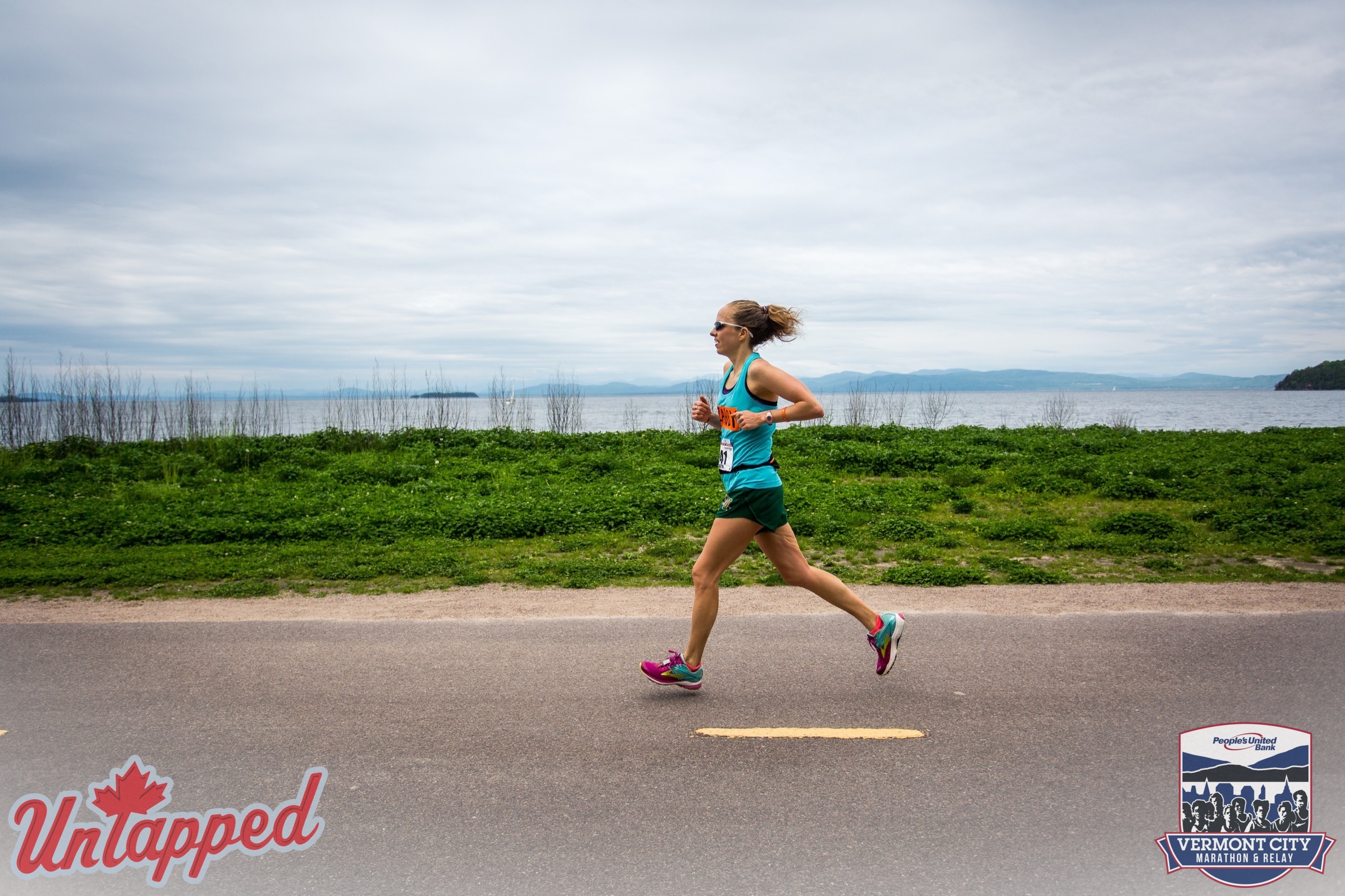 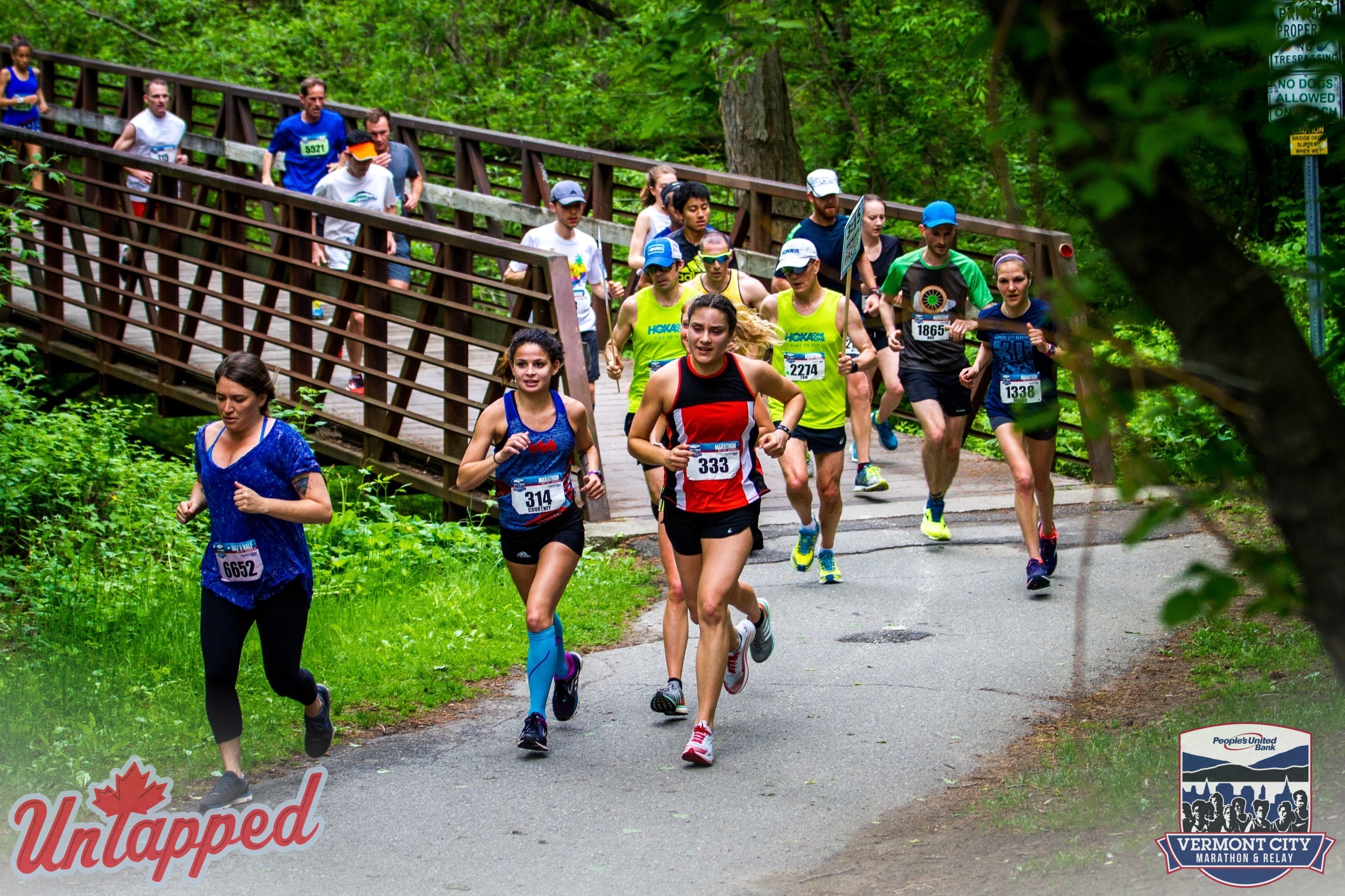 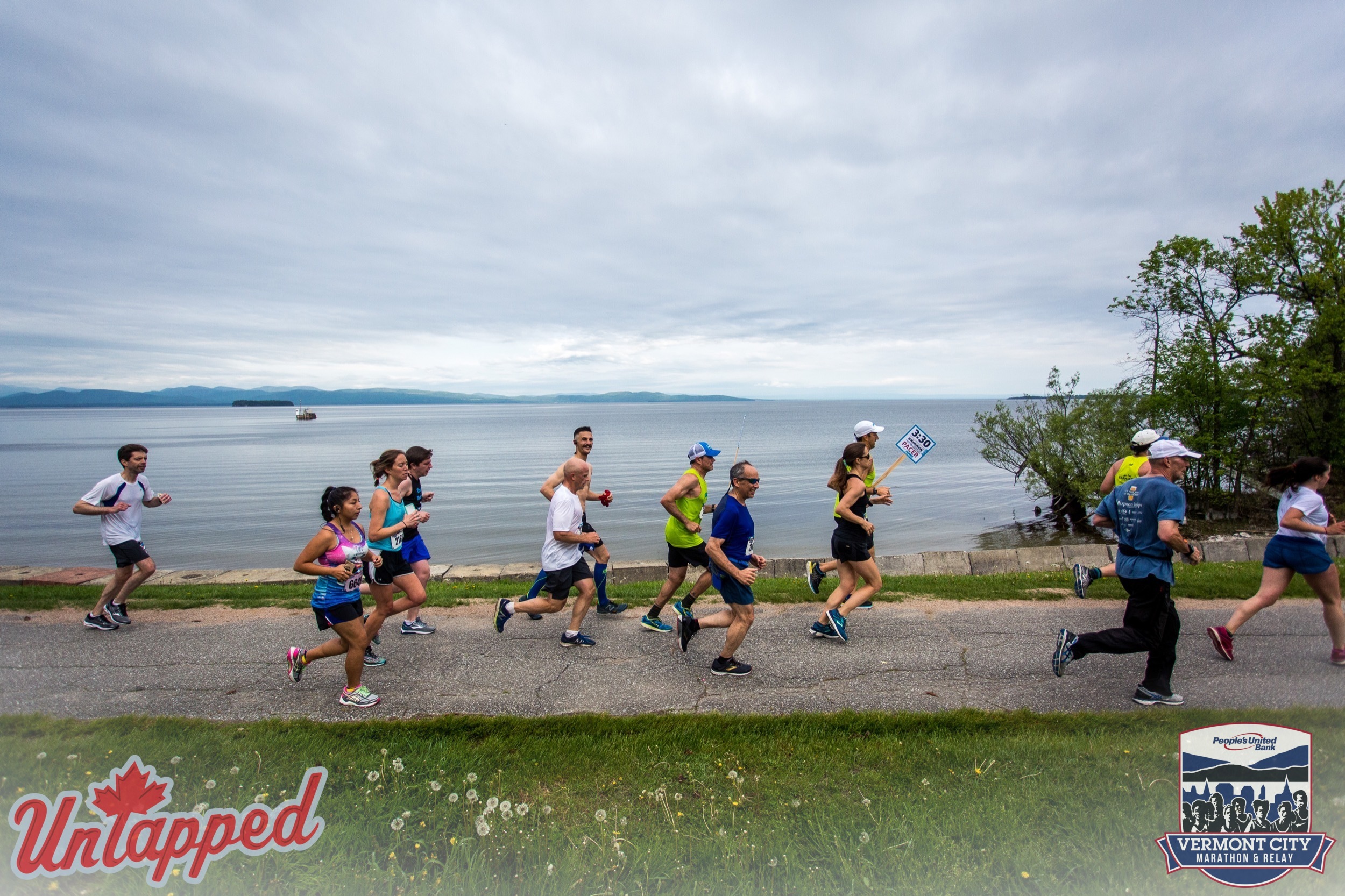 These photos were found online with the results, so really nice, free race photos seem to be part of the swag!! (My favorite!)

The course overview even boasts its starting view overlooking Lake Champlain and the Adirondack Mountains!

Not only does the scenery looks amazing, but the course itself looks pretty optimal too. It goes by the start at multiple points for easy support without just being the same small loop repeated. Three of the four segments are even loops (not out and backs)! I’ve never seen a course quite like it, but I feel like I’m really going to enjoy it! 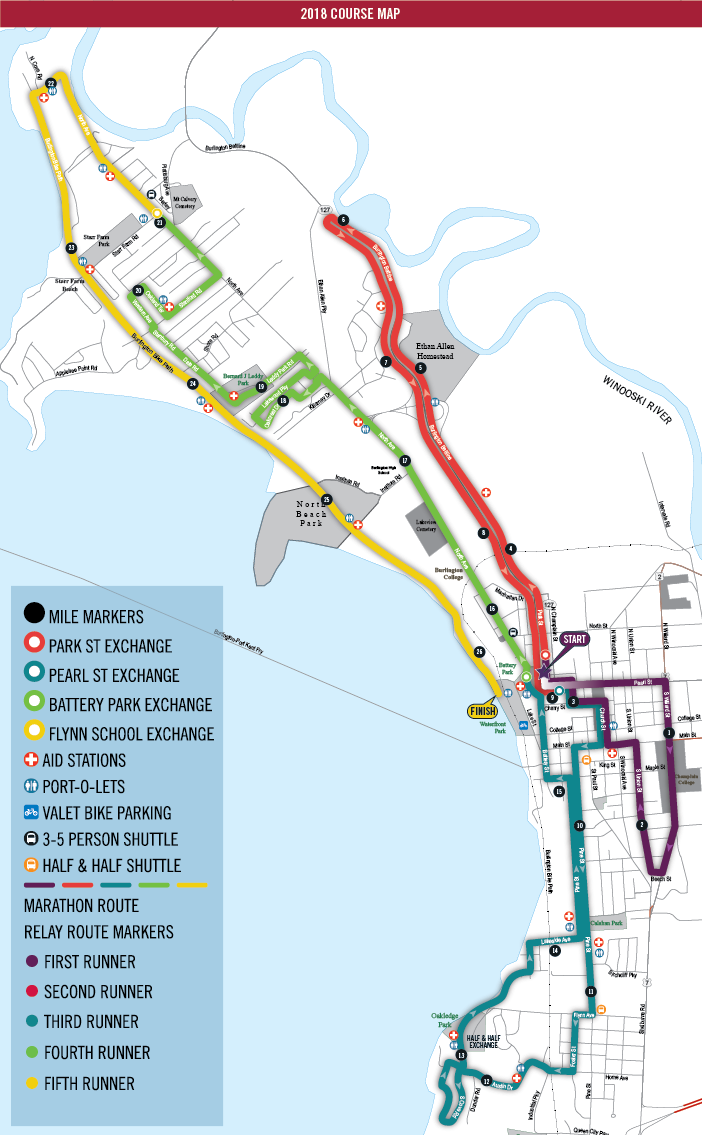 One last fun fact is a friend of mine BQ’ed at this race, so clearly it has to be lucky! 😉

Anyway, I’m super pumped for this race and if it sounds fun to you too you should use the code BibRave10 for $10 off registration and let me know that I’ll see you there!! 🏃‍♀️💨